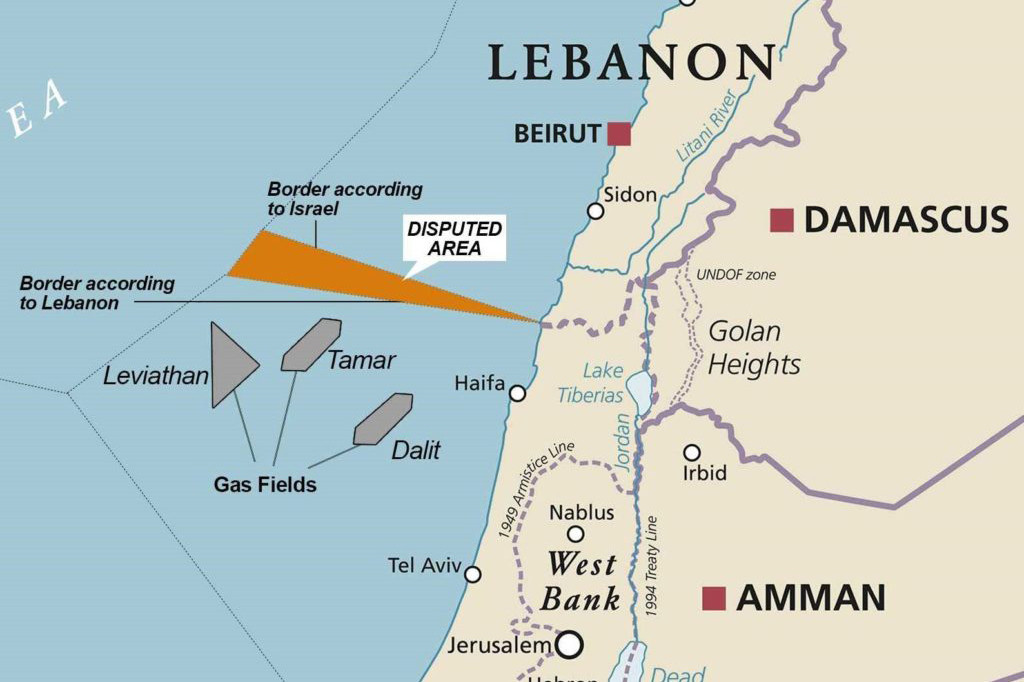 Israel and Lebanon launched their first round of indirect negotiations over disputed maritime borders on October 14. The one-hour session was hosted in a United Nations base in Naqoura, near the Israeli border, and was mediated by the US, with the presence of both national delegations and the UN Special Coordinator for Lebanon, Jan Kubis.

Talks started after a framework agreement was reached between the parties, setting the general terms of discussions. Issues such as the location and the detailed agenda were agreed upon prior to the talks, while a portion of about 860 square km of the Mediterranean remains the content matter to be solved. The agenda will unfold through four stages, that include, but are not limited to maritime delimitation. The first one will be the setting of the land reference point, from which to depart towards the sea. The second point will aim to define the southern maritime border where the disputed area is located. The third will finalise the agreement over the land border demarcation after the completion of the maritime delimitation, while the fourth one will aim to exchange final documents.

Although the event was broadcasted as a historical move, it is not the first time that the two countries enter talks. Both representatives have had regular, security-related talks. Past initiatives to negotiate borders include the 1996 border monitoring group or the tripartite committee, under UN leadership.

The US administration has played a central role in leading these efforts. “The border dispute between Israel and Lebanon goes back to 2011 and since that time, there has been successive American mediators trying to reach a breakthrough in the negotiations : Frederick Hoff, Amos Hochstein, David Satterfield, and currently, David Schenker”, says Charbel A. Skaff, lecturer at the Université Saint-Joseph and author of a book reviewing the main stakes of the Lebanese gas sector (“Le Gaz au Liban: Souveraineté et Enjeux”).

Despite US leadership, recent attempts to reach a framework agreement as a basis for negotiating disputed borders have consistently failed, mainly because the parties did not agree on the format (place of negotiations, who will lead the talks etc.), as well as on the content (shared principles for negotiations). Given this background, current discussions are the most successful attempts at resolving the dispute and, for the first time, Israel and Lebanon agree to negotiate permanent maritime borders, while at the same linking them to a land reference point.

Internal as well as regional factors give further explanation on the timing of the negotiations. Both countries are struggling with the COVID-19 crisis, which has negatively impacted national economies. General discontent as well as regular protests are growing in both countries, pushing national governments to seek political credit in recently found national resources.

Despite the global crisis having severely impacted prices, the oil and gas sector has gained new relevance as a way out of the economic crisis. In Lebanon, hopes towards an offshore gas sector went down in April 2020, when the first exploration well came up dry. But the severe financial and monetary crisis that hit the country has made negotiations a matter of urgency for politicians who associate an agreement with the possibility to unlock potential revenues.

Israel is much more advanced in the exploitation of its oil and gas fields, the Leviathan platform having officially started its production in late 2019. But the country is also rushed to provide reassurance to the companies involved, which are often reluctant to further proceed before getting security reassurance on external military threats, including Hezbollah.

Beyond the economic and political contexts, the October announcement takes place within a timing “that is certainly not innocent, and that cannot be read separately from the broader geopolitical environment”, says Cherbel Skaff. Bahreïn, the United Arab Emirates and Sudan have recently announced their intention to normalise ties with Tel-Aviv. While the US administration is positive that more states will follow suit, it has been actively facilitating contacts between Israel and several Arab countries. “The major factor weighing in for these negotiations is a political decision at the regional level”, concludes Cherbel Skaff.

But the Lebanese case seems different as both sides have insisted that the move cannot be interpreted as a sign of normalisation. While Israeli officials have mentioned the possibility of holding direct negotiations in the future, Lebanese counterparts have denied such statements, insisting on the purely technical aspects of the move. This was further backed by the US envoy David Schenker, who confirmed that talks had “nothing to do with the establishment of diplomatic relations or normalisation”.

If parties have agreed on the technical aspects of negotiations, different claims over the disputed area might hinder the process and eventually jeopardise the outcome of the talks. Lebanon, whose position is based on the UN Montego Bay convention (1982), insists on getting full sovereignty over the area. In 2012, the Lebanese government rejected an American proposal suggesting to grant Lebanon 550 square km of the disputed zone, while giving Israel one third of the remaining area. Israel, who is not a party to the convention, refers to an agreement that was signed between Cyprus and Lebanon in 2007, but never ratified by the latter. Given both sides’s positions, a compromise regarding the percentage to be shared in the disputed 860 square km might be hard to reach, and will be the decisive factor influencing the successful outcome of the Naqoura talks.

As part of a new strategy based on the 1923 demarcation line between French mandate over Lebanon and British Mandate over Palestine, Lebanon is now expected to push for an additional 1430 square kilometers to be included in its territory. Difficulties in reaching an agreement might be compounded by these new claims that will include two disputed gas fields, known as Block 72 (Alon D) and Karish. In 2019, Greek oil and gas company Energean declared that  “significant discoveries” were made in the Karish north exploration well. Late June, the Israeli government announced the opening for drilling of Israel's Block 72 (Alon D), adjacent to Lebanon’s Block 9, which was swiftly condemned by President Michel Aoun as a “dangerous move”.

Read the full "Lebanon Oil and Gas Newsletter" for October 2020, published by Kulluna Irada and The Lebanese Oil and Gas Initiative (LOGI) here.