Kulluna Irada's Board of Directors is composed of 15 members. Every two years, the Global Council elects 10 new members to the Board, in order to ensure rotation. The Board of Directors relies on collegial decision making and follows strict rules to avoid any conflict of interest: members of the board have vowed not to run for elections and to renounce to participate in any public auction.

Below are the profiles of our current Board members. 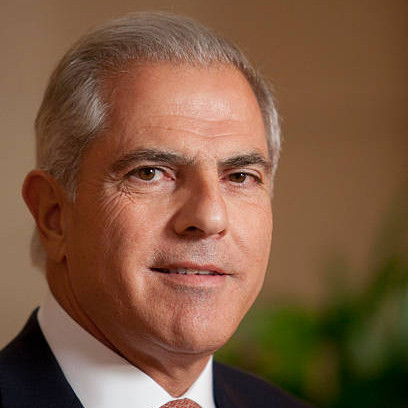 Gaby Abdelnour is the former Chairman and CEO for JPMorgan Chase (Asia Pacific), an American multinational banking and financial service. Previously, Abdelnour worked as an M&A banker at Merrill Lynch & Co in Asia, and also spent a decade as a Managing Director at Bankers Trust. He has been a Non-Executive Director of several global institutions, and is now concentrating his activities on private investments. He is also a Board member of Right to Play, an international NGO focusing on children. 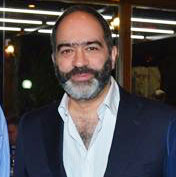 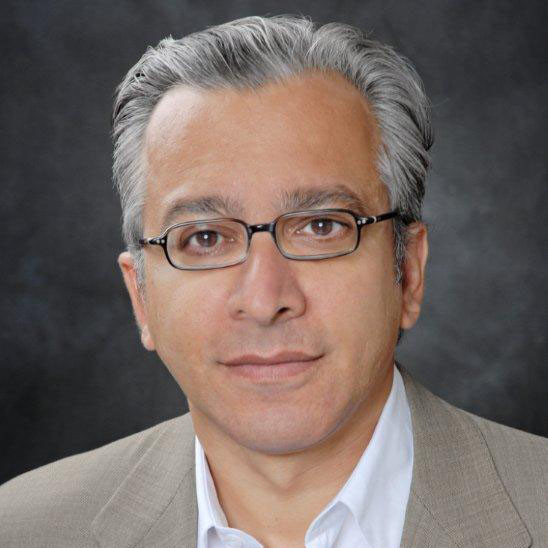 Amer Bisat is the Managing Director and Head of Sovereign and Emerging Markets (Alpha) at BlackRock where he leads a team managing approximately $20 billion in government and corporate bonds. He is a member of the Fundamental Fixed Income ExCo and named PM on several flagship BlackRock funds. Prior to that, he held portfolio management positions at Morgan Stanley and UBS and, between 1991 and 1998, was a senior economist at the IMF. He taught graduate level economics courses at Columbia University, co-authored a book on globalization, and published number of papers on growth and financial economics. He is the former president of the Arab Banking Association of North America and a member of the Council of Foreign Relations. Amer Bisat earned a BA in economics from the American University of Beirut and a PhD. from Columbia University. 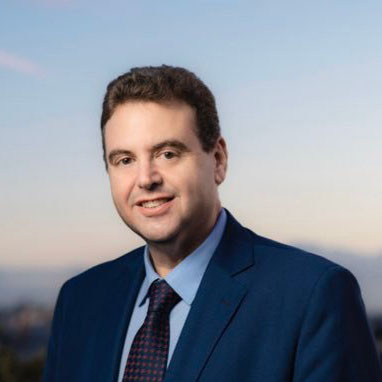 Karim Bitar is the Research Director at the Institute for International and Strategic Relations in Paris (IRIS) and the Director of Political Science Institute at Université Saint-Joseph. He is an Associate Fellow at the Geneva Center for Security Policy (GCSP) and a Research Associate at Brussels’ Institut Medea. In addition, Bitar is the Vice-President of the Circle of Arab Economists and the secretary general of the Emile Bitar Foundation. Karim Bitar graduated from France’s National School of Administration and from the Paris Institute of Political Studies. He also studied Law at the University of Paris Sorbonne and obtained a BA in Economics and International Relations from McGill University. He spent his senior year at Harvard where he studied Government and specialized in Middle East Studies. 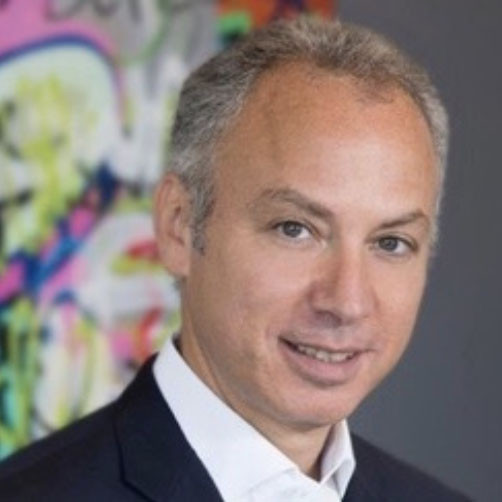 George A. Bitar is a Managing Partner of Rho Acceleration, an affiliate of Rho Capital Partners, a venture capital firm that actively invests in technology and new media and clean tech. Formerly, he was co-head of Global Private Equity at BlackRock, Inc. and co-founded and co-led Merrill Lynch Global Private Equity. Bitar served as well on the board of directors of a number of private and public companies operating in several industries including healthcare, consumer products, manufacturing, banking, re-insurance, retail and business services. George Bitar received a B.S. degree in Systems Engineering from Boston University and an M.B.A. in Finance from Columbia University. 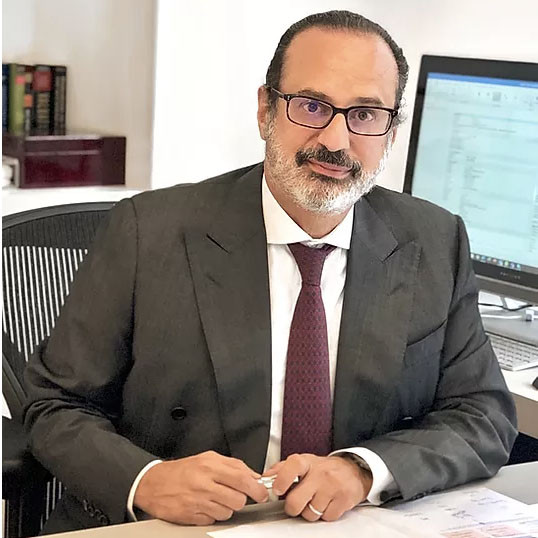 Henri Chaoul is the Co-Founder of Levantine Partners, a financial advisory firm. Prior to that he served as the Chief Investment Officer and Head of Asset Management of Al Khabeer Capital, overseeing the investment of approximately USD 1 billion. Currently, he serves on the board of EnvisionTEC in the U.S.A. as an independent board member, and is the Chairman of the board of FXBFI in Cyprus. Chaoul has more than 15 years of investment banking and asset management experience and more than 10 years of consulting experience across the United States, Europe, and the Middle East. Henri Chaoul has a Ph.D. in Economics from Columbia University, New York, and B.A. Honor's Degree in Economics from the American University of Beirut. 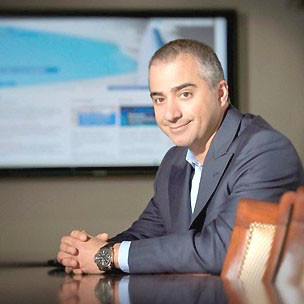 Habib Kairouz is the Managing Partner of Rho Capital, a US based private equity firm focused on the technology sector. He has been involved in a number of non-profit organizations focused on reforms and economic assistance for Lebanon. He currently serves on the boards of Social & Economic Action for Lebanon and Lebnet. He is also a former board member of LIFE and Endeavor Global. Habib Kairouz holds degrees in Engineering and Economics from Cornell University and an M.B.A. in Finance from Columbia University. 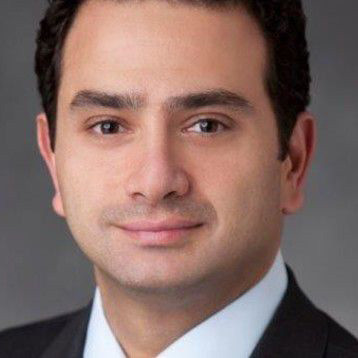 Wissam Kairouz is a Managing Director at Morgan Stanley’s Leveraged & Acquisition Finance Group in New York where he is in charge of different industry verticals including Media and Financial Services (FIG). Prior to joining Morgan Stanley in 2009, Kairouz was a Managing Director in the Global Leveraged Finance group at Merrill Lynch. Formerly, he worked in fixed income investment management with Black Rock for 4 years. Wissam Kairouz received a B.A. in Economics and Political Science from McGill University and an M.B.A. in Finance from Columbia University. 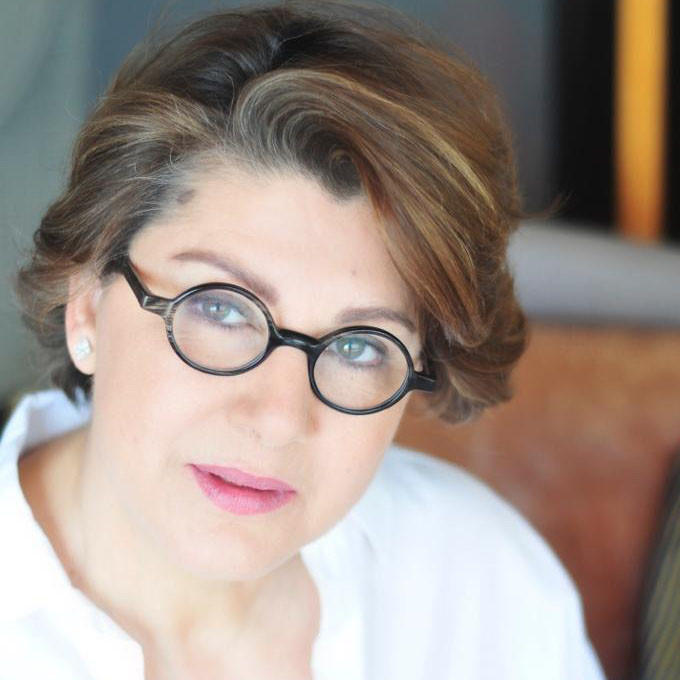 Randa Kahlil is a Jewelry designer and owner of Randa Khalil Raad Jewelry. She learned jewelry design at the Museum of Islamic Art, during the late 1980s in Kuwait. Her extensive collaborations with goldsmiths, stone setters and enamelists allowed her to develop her creativity from experts and creatives from around the world. Khalil has long used her talents to benefit charities, first for organizations helping the handicapped in Geneva and later by giving proceeds from her sales to Medecins Sans Frontieres in the Emirates and the Children’s Cancer Center of Lebanon. 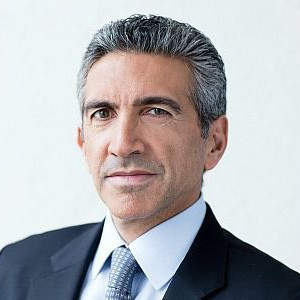 Paul Raphael currently serves as Executive Vice Chairman of UBS. Paul joined UBS in 2010 and had served as UBS’ Head of Wealth Management for Europe, Middle, East, Africa and Latin America where he managed USD 450Bn of client assets and over 3,000 employees across 4 continents. Before joining UBS, he spent six years at Credit Suisse, including three years in Hong Kong as Head of Investment Banking for the Asia Pacific region, and served on the bank’s Global Investment Banking Operating Committee. Previously, he headed Equity Capital Markets and subsequently served as Co-Head of the European Financing Group in London. Prior to Credit Suisse, Paul spent 10 years with Merrill Lynch initially as Head of its Emerging Markets activities in Europe across all products. Later, he also served as Head of French Investment Banking and European TMT client coverage. From 1986 to 1994, he was at Salomon Brothers in New York eventually leading the Latin American Investment Banking teams. Paul Raphael holds a degree in Economics from the University of Maryland and an MSc in Management from MIT. 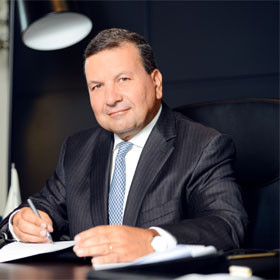 Jean Riachi is the Group Chairman and CEO of FFA Private Bank, the leading Lebanese bank specialized in Capital Markets, Wealth Management, Asset Management, Real Estate, and Investment Banking. Founded in 1993 as a securities brokerage firm, FFA was authorized as a specialized bank by Banque du Liban (BDL) in 2007. Riachi is also Chairman of FFA Dubai, the first Lebanese Financial Institution to get a license from the DFSA in the Dubai International Financial Center (DIFC). He was a member of the Ministry of Finance's committee in charge of drafting the new Lebanese Financial Markets law. He is an active member of Human Rights Watch Beirut committee (HRW) and a board member of the Lebanese American Chamber of Commerce (AMCHAM Lebanon). Jean Riachi holds a Master’s degree in Business Administration from HEC Paris and is a certified director (IDP-C) from INSEAD’s International Directors Programme. 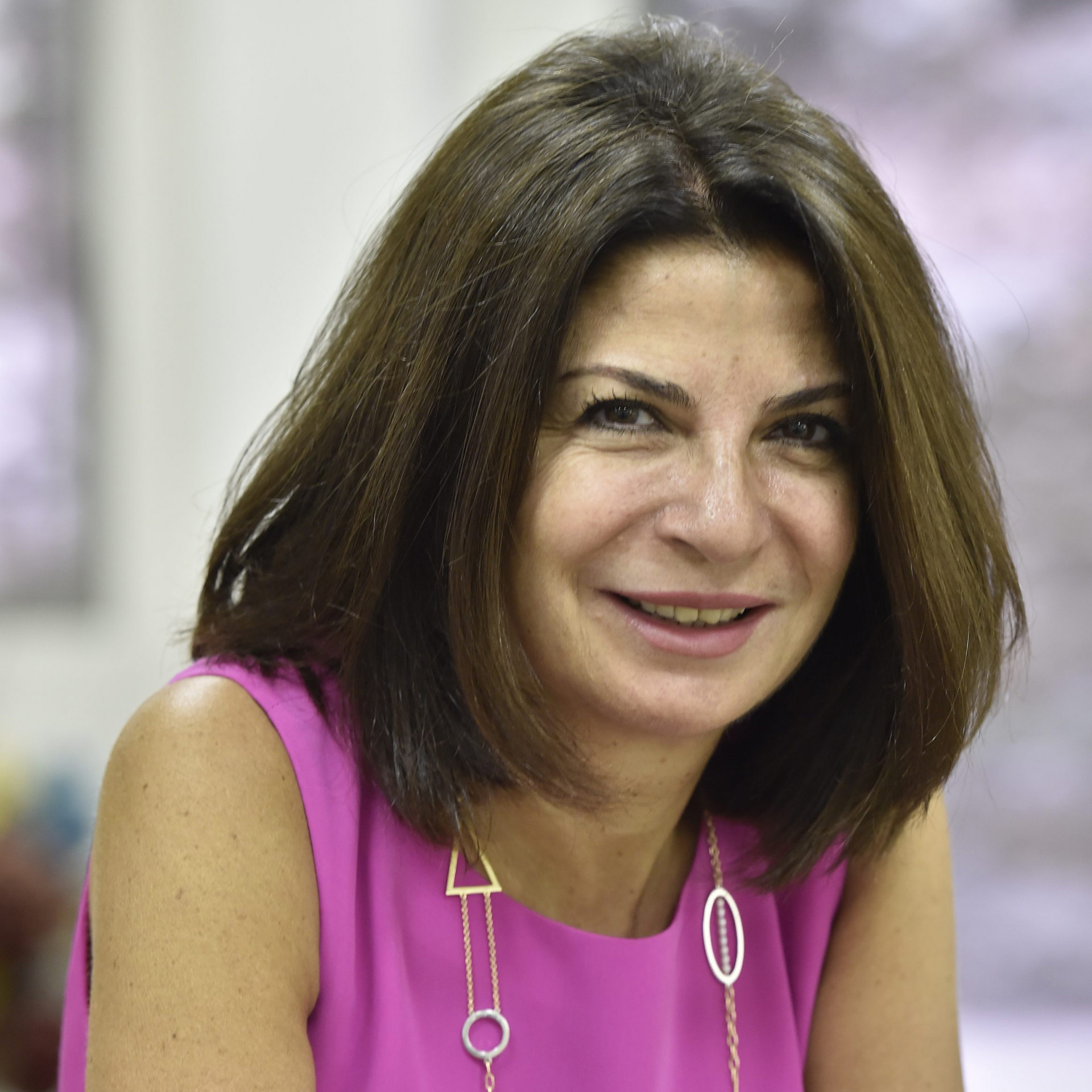 Wafa Saab is the CEO of Tinol Paints, a leader in the Paint & Coatings industry in the Middle East, founded in 1956. She was elected as the Personality of the Year in the Industry Sector in 2012 and was the first woman to be elected as President of the Worldwide Alumni Association of AUB in 2015. She is currently chair of the AMIDEAST/Lebanon Board, and sits on the boards of various non-profit organizations, namely Embrace, the Beiteddine Festival, the Lebanese Red Cross, and Mission Joy. Wafa Saab holds a BA in Human Development from LAU and an Executive MBA from AUB. 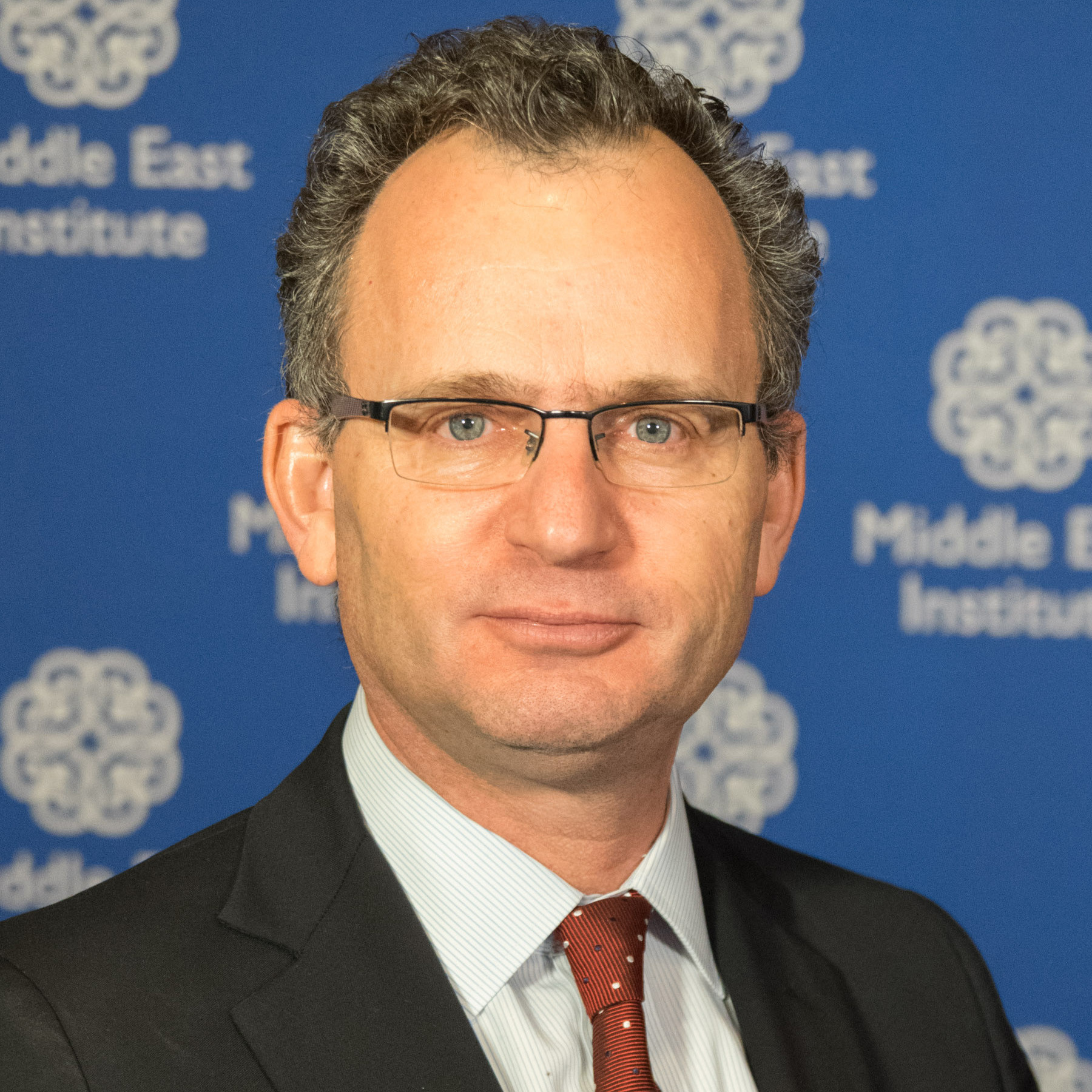 Paul Salem is President at The Middle East Institute. He focuses on issues of political change, transition, and conflict as well as the regional and international relations of the Middle East. Salem writes regularly in the Arab and Western press and has been published in numerous journals and newspapers. He is also the author and editor of a number of books and reports. Prior to joining MEI, Salem was the Founding Director of the Carnegie Middle East Center in Beirut, Lebanon between 2006 and 2013. He was also director of the Fares Foundation and in 1989-1999 founded and directed the Lebanese Center for Policy Studies, Lebanon’s leading public policy think tank. 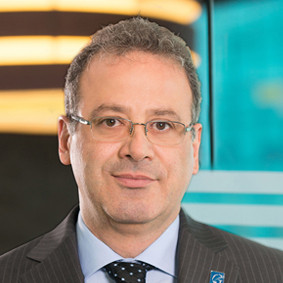 Bassam Yammine is the founder and CEO of Excelsa Development Holding, a diversified investment holding company. Excelsa invests in operating companies active in the real estate, oil & gas, and manufacturing sectors in the Middle East and North America. Prior to founding Excelsa in 2013, he led the growth and development of Credit Suisse in the MENA region over six years as Co-CEO of Middle East & North Africa and head of investment banking. Before that, he was the founder and CEO of Audi Saudi Arabia and managed the regional investment banking business for Audi Saradar Group. He also worked with Lebanon Invest SAL, the first investment bank in Lebanon where he held the role of General Manager and Member of the Board. Bassam was Deputy Chairman of Li Venture (Holding) SAL, the first venture capital firm in Lebanon. In 2005, he served in the Government of the Republic of Lebanon as Minister of Energy and Water. Bassam Yammine holds an M.B.A. in Finance from the University of Chicago and M.S. in computer science and B.A in business from Loyola Marymount University.