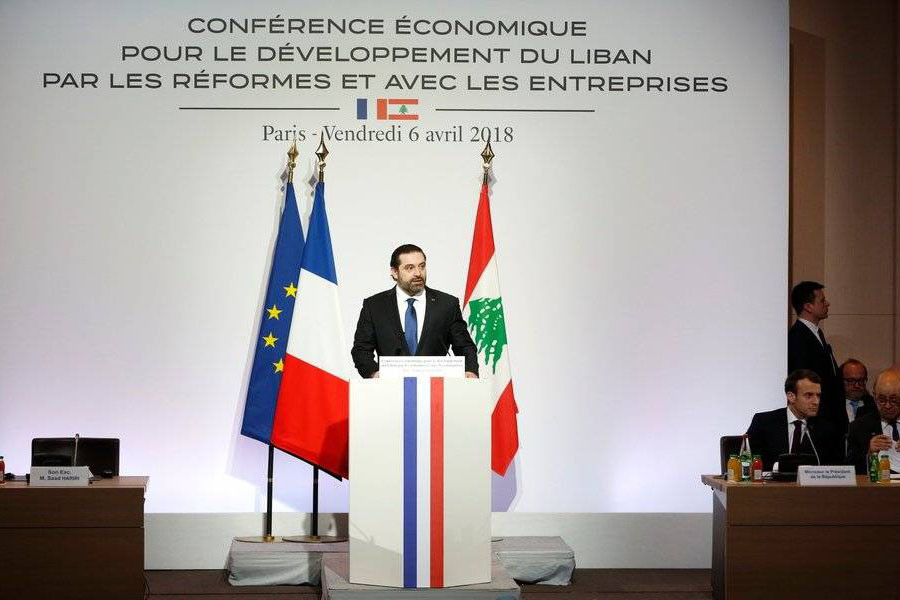 The government is preparing a new major donor conference for Lebanon to be held on April 6 in Paris at the invitation of President Emmanuel Macron. Rather than calling it Paris 4 and putting it in the continuity of the three similar events that took place in the French capital in 2001, 2002 and 2007, and failed to achieve the promised results, the meeting of donors was named CEDRE. It stands for Cedar in French, and is the acronym of Conférence économique pour le développement et la réforme avec les entreprises (Conference for economic development and reform with the private sector).

This conference is the economic component of a series of three consecutive international conferences, the other two being devoted to supporting Lebanese security forces (Rome) and Syrian refugees (Brussels).

Although the theme of the CEDRE Conference is economic, its objective is also political. The event must be analyzed in the continuity of Saad Hariri’s true-false resignation crisis in November 2017 and the run-up for the May general elections. Unfortunately, this major event is prepared in opacity and rush, with no clear strategic plan, despite the urgent need for economic, social and financial reform.

On the Lebanese government side, the stakes are:

On the international side, the motivations are diverse but convergent:

Infrastructure modernization with a pinch of reform

The decision to rename the conference, and not to mark it in the Paris conferences series, is also an implicit way of avoiding to address economic and social "reforms", even if the R letter in the Cedre word, stands for reform.

Technically, the Cedre conference should be read as a conference on the modernization of Lebanon's infrastructure based on a list of new or old projects (the drawers of ministries and Parliament abound with those) collected for the occasion and valued more or less seriously.

A few weeks ahead of the conference, no official list of projects had been communicated to the general public, let alone an overall strategy for prioritizing these projects in a more global context. But the Prime Minister's team talks about 120 to 160,000 job creations and a GDP increase of 6 to 8%.

A preparatory conference is scheduled for March the 6th, and meanwhile, some unofficial documents were leaked to the press. The Prime Minister’s cabinet sent late 2017 a list of 250 projects to the World Bank and France, the host country, and has promised to deliver a final list – named Capital Investment Plan – by mid March. This leaves very little time to potential donors to deep dive into the investment plan.

In a press conference held on February the 20th at the Prime Minister’s office the general outline of the Capital Investment Plan was announced:

An effort of rationalization is  undertaken, at the request of the donors, and the Lebanese cabinet is also promising to adopt the 2018 budget ahead of the conference. The list of projects of the Lebanese government, called Capital Investment Plan, will be supported by:

The main financing tool for these investment projects will be provided by the World Bank through its Global Financing Concessional Facility, but the Lebanese government also hopes to mobilize private financing – the target is set at $ 6 billions dollars - through the Public Private Partnership (PPP) tool.

The World Bank's willingness to help Lebanon has resulted in the implementation of a "blending" mechanism, namely the mixing of donations and loans, which will enable it to access loan conditions similar to those that benefit the poorest countries (ie International Development Association terms of credit). While the level of Lebanon development does not theoretically allow it to benefit from such privileged credit conditions (1.5 % interest rate over 20 to 30 years, with a 10 years grace period), the concept of its contribution to the Global Public Good, through hosting Syrian refugees, has been invoked to justify this international effort.

PPP: between discourse and reality

There is a lot of publicity surrounding the new legal framework for PPPs, but on the one hand the real appetite of the international private sector for this type of operation is still uncertain given Lebanon's history of slow implementation and lack of transparency and, secondly, the financial cost of these arrangements is still far from being clarified, in the absence of a budgetary framework that conforms to international standards (comprehensive budget, multi-year program laws, etc.)

Mid-February, the High Privatization Council charged with implementing PPPs, had a green light in principle for three projects: the expansion of Rafic Hariri International Airport, the Dbayé motorway network, and the national data center entrusted to Ogero (almost nothing has been officially communicated on most of these projects).

"For the alcoholic to start a healing process, he needs to be aware of the pain he is suffering from”. “Today the Lebanese political class is in denial”. “The Lebanese authorities manage once again to convince their Western partners to support them by waving the threat that Lebanon will fall into chaos 'and they get away with it!'".

These unofficial statements testify to the discrepancy between how those involved in the technical preparation of the Cedre Conference understand the real challenges of such an event for Lebanon and how decision makers’ overarching geopolitical agenda prevail over the need for reform in Lebanon.

With the organization of the Cedre Conference, Lebanon once again enjoys an exceptional solicitude on the part of the donors and this opportunity should be seized to engage in the real economic, financial and social restructuring that the country needs.

Fears are that this solicitude will bring the financial fuel needed by the oligarchic system in power to continue driving the country from failure to failure.

Below are some of the questions that need to be answered on the eve of a major event for the country:

1- What is the strategy?

2- In the absence of any strategy, what is Lebanon’s absorption capacity?

3- Where is the national debate on such a major event?

Paris, CEDRE and Beyond: Focusing the Debate on Lebanon’s Structural Reforms